Archive for the tag “Tea”

I checked this morning and it’s still winter and predictions of snow and storms are still filling most of the news for various parts of the U.S. including ours.  In addition to the complaining and kvetching, most of us seek something to release the burden of snow and darkness from our minds.   For me, one of the most uplifiting things in life is tea in all its varieties.  Tea preparation, experiementation, and drinking it is part of my connection to the Goddess and the sacred; tea is an important part of my spiritual practice and daily routine.    Imagine my delight when research an earth goddess for a meeting of my circle, I came across another connection to one of my favorite, mate!   There are no ancient pictures or statues of her but plenty of modern ones.  She is also a really great of example of the Rowdy Goddess.  She was not content to stay as the ancients portrayed her and she has evolved into a goddess for the 21st century.

Pachamama is an Earth and Time Goddess revered by the indigenous peoples of the Andes Mountains, a range that covers Bolivia, Peru, and Argentina.  She was seen as Mother Earth and was often depicted as a dragon that could cause earthquakes when things no longer pleased her.  In the time of the Incas, she was a fertility goddess who presided over planting and harvesting.  Llamas and clothing were sacrificed to her and she was seen a cruel goddess who eagerly demanded her sacrifices.  Her husband was the Supreme God, of whom it is said that she birthed him from her own body.  Her children are the sun and the moon. After the Spanish Conquest and the forcible conversions to Catholicism, she became associated with the Virgin Mary.  As Peru and the other nations evolved, so did she.  To this day, she is seen as a benevolent goddess, ever present, self-sufficient with a creative power to sustain and nurture the earth.   Now when people talk of taking too much from the earth, they phrase it as taking too much from Pachamama.  Many environmental activist groups take her name in honor of the earth.

There are a number of festivals in her name, both community and in the home.  Most of her festivals involve food, pouring food and drink onto the ground, or honoring her with thanks and celebrations.  August in the southern hemisphere is the coldest month and many rituals involve protection the people, the crops, and the earth.  People drink mate to bring them luck.

Mate is a South American caffeinated drink made from steeping the dried leaves of the yerba mate.  There are many traditional preparations and rituals surrounding the drink.  In the industrialized world, it is sold as a tea and while technically not a tea, it is often used as a substitute for coffee because of its strong, rich, bold, caffeinated flavor.  The legends of the Guarani (Paraguay, Bolivia, and Argentina) say that mate was created when the Moon and the Cloud came to Earth to visit.  Instead of a friendly greeting, they were met by a jaguar, ready to attack them.  An old man rescued them and with gratitude, these Goddesses gave him a new plant from which he could make the “drink of friendship.[1]”  In tribute to Her and the great Earth she is and protects, I add a simple ritual to my morning mate routine.

This is a morning ritual for your first warm beverage of the morning, preferably mate.  Brew a pot or cup of mate in your preferred method.   Pour yourself a cup of the mate with this charm:

I pour this liquid in my cup

So all day long I’ll have good luck.

Add sweetener (honey or sugar) and cream, if you prefer.  Regardless of whether you add or not, stir the liquid deosil and say these words:

With flavors rich, bold and strong

And stay with me, Goddess, all day long.

Take your drink to a special place outdoors[2], and pour a portion onto the ground with this prayer:

In gratitude and blessings, I call to Pachamama

Mother of Earth, Mother of Time

She of the sowing, weeding, reaping and storing,

She who brings forth the bounty and nurtures the earth

I thank you for the beauty of the green earth

The strength and illumination of the sun and moon,

I honor the sacrifice, benevolence, and love

With this drink made with your leaves.

Thank you for this day lit well with sunlight

And thank you for the night illuminated by moonlight!

[2] If the weather or situation means you must stay indoors, pour your gift to the Goddess into a small bowl of soil to be left outdoors at another time.  B*B

a nice hot cup of tea!

I’ve been away from blogging for a while.  My mother went into hospice last April and passed peacefully away surrounded by her family.  I needed a lot of time to grieve.  I’m still very sad and there’s still a lot of stuff to do, but I wanted to get back to some things I love to do. One of the things that remind me of my mother is tea.  She tried many kinds and always went back to Liptons.  She drank a lot of tea!  When I was a kid, she drank coffee with cream and sugar.  When she started teaching during my junior high school years, she switched to tea.  Story was, that the teachers she hung out with, charged 50 cents for a cup of coffee but tea was free.  Fifty cents was a lot of money for a cup of coffee, so she switched to tea.  And loved it.  She never went back to coffee.

I love a good cup of tea and I like variety.  I’m not a purist, I just like what I like.  To me it’s a mini-retreat in the midst of a busy day.  Tea is also a pick-me-up and an oasis.  I am trying to give up diet soda and now tea is my go-to drink.  Note:  I gave it up for several months but after several long car trips, diet soda was the easiest.  So I will be switching back to tea.

Tea often gives rise to reflections, divination and “deep thoughts.”  Sometimes, though, a cup of tea is just a cup of tea!  Whatever the moment, it is refreshing.

I read somewhere that starting with a spicy drink, such as pepper, cinnamon, or similar tea, can boost your metabolism and help you towards better fitness.  I have several and sometimes I think it works.  Today’s tea is from serendipiTea and is called Sssssspicey, and is an “organic Blend of Cinnamon, Ginger, Clove and Black Pepper.”  Technically, it’s a tisane since there is no tea in the blend.

It is wonderful and VERY spicy.  The blend gives you both a foretaste and a nice afternote.  The spices are very aromatic and just smelling it is an energizing experience.  It certainly is an invigorating tea for a Monday morning at work!  It is definitely effective.  I have gotten a lot done this morning.

As you can see, it’s a loose blend.  As I was sniffing it, I dropped the tea strainer into the brew and my cup was awash with the leaves and bits of herb.  I had to strain it again.  The tea did not guarantee grace or a spell against clumsiness!  Even after I finished the cup, the scent lingered on.

May your Monday be an energetic delight, and end by relaxing into sereniTEA!

A Winter Gathering of the Rowdy Goddesses 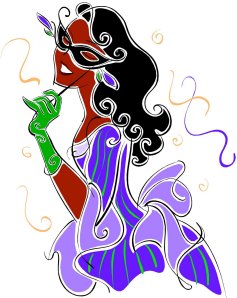 Tomorrow is Mardi Gras, but we’ve celebrated it already with “Let the Rowdy Times Roll!” It seems that once a year at Womongathering isn’t enough. So this year, our dear friend Phaezara opened her hearth and home to a gathering. Traveling from Philadelphia, Virginia, and from points across New York, rowdy women gathered to party. Included were women from Womongathering and also some of our friends who haven’t been able to make it to the summer gathering.

We went shopping at Seven Rays in Syracuse and then we went to tea at the White Dove Tea Room. A caravan of six cars is often hard to lead and to follow, but we all made it even after getting double parked in at the Church of the Assumption. Shows what assumptions will do for you…get you blocked in and unable to move forward.
It was wonderful, capped off by a ritual involving the beauty and wonder of our masks. Let’s face it, we have them. They are beautiful, our masks are barriers, and they are our aspirations. More to explore with masks……
May wonder and beauty be yours as you let your Rowdy times roll!!!!
Posted in masks, Rowdy Goddess, tea, witchcraft and tagged masks, ritual, shopping, Tea | Leave a comment

Tea, Hot Water, and the Goddess