Archive for the tag “friendship”

Welcome to the Never Live It Down Club

Welcome to the Never Live it Down Clubhouse
Source of the photo: http://www.greendump.net/

Families remember a lot about you. Sometimes even when you change, they remember and remind you of how you used to be. Like so many things, it’s a blessing and a curse. Depending on the emotions behind it, you land in the realms of forever guilty or in a land of warmth, laughter, and remembrance. It’s a fine line to walk, reliving these memories. Longtime friends can also be also create this living legacy of memories, joking nudges, and memories.   This whole thing can be fun and funny or sometimes just plain annoying.

Since I’m the oldest sister, I am the custodian of a lot of sibling and family memories.  Well, I’ve also been a memory-maker to the point where I believe I’m in the Never Live It Down Club Hall of Fame.  When I was nine or ten, I was in my grandmother’s front room (a place where children were not allowed to go without an adult) and I picked up a jar to look at, a forbidden activity.  The lid fell off and broke a little blue glass basket.  I felt really bad.  I don’t remember being punished but probably my remorse is punishment enough, memorywise.

When my grandmother returned, she fussed as only she can fuss.  Apparently the thing I picked up was cheap and what I broke was a collectible.  Luckily (not) she had two of them.   Later, in my thirties, I was at my grandmother’s visiting and an interesting incident occurred.  My grandmother was confined to her chair because of an injury and she was directing my aunt in rearranging something when my aunt knocked something over.  My grandmother fussed at her and we were all relieved it wasn’t broken.  “Don’t worry,” I said, “I broke a valuable collectible when I was 10.  You can’t top that.”  My aunt, still only recently married into the family, said, “I know.”

That’s when I knew that I was in the Never Live It Down Club.  The funny thing is that when my grandmother died and her stuff was divided up, my mother, her daughter, made sure that duplicate of the broken item came to me.  It is a treasured trophy of my club.

Of course as an older sister, I have stories.  Recently, I was visiting my mother and sharing some of the stories.  My mother’s memory isn’t as strong as it once was.  I was relating one story about my sister and she said, “I hope you’re writing all these down; some of them I haven’t heard.”  Perhaps I will.  I just like reminding people.  It’s my duty as the President and Hall of Famer of the Never Live It Down Club.

I am relating stories with love and affection and perhaps a little bit of “gotcha.”  I realize many memories that don’t get forgotten cause pain, sorrow, and guilt.  I can only hope that time and love will help assuage them.  In my world, the Never Live It Down Club is only for happy memories.  The other ones are ones we need to let go and transform into something better.

Friendships, Transitions, and the Death Card 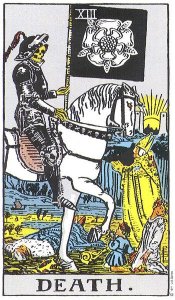 I’ve been thinking about transitions and friendships lately. On three occasions, recently, a name or a picture of someone who was a good friend in the past has popped into my life. I was recalling with some fondness and nostalgia my memories of this person, this person, and that person as their name or picture popped up.

I remembered, though without any force, the pain I had experienced when they left my life. The transition and change was rugged, sorrowful, and full of anger in some of these cases. In one case, I had changed in way unacceptable to my then friend and so the relationship was ended. In another case, the person had to make a transition of her own and did not carry our friendship forward into this new life of hers, and the other was a misunderstanding that on the surface was minor but was really an indicator of a dying friendship. In a couple of cases, there was a modicum of betrayal or desertion felt by me and in another, an acceptance of what was to be.
It made me think of the Death card. In this 21st century, we read the death card as transformation and change rather than the death of the body, though when I read it that way, I hear Rachel Pollack’s voice say that sometimes death is about death. In these three cases, it is about death. At one point, I had become a different person and the person that was a good friend to my friend, died in her eyes. She couldn’t accept my transition. In another case, my friend was changing and she couldn’t envision her life with our friendship viable within it. And in the other, the period of denial and bargaining was over and the death of a friendship was accepted.
None of these were easy. Inevitably, transformation means that something will not make it through to the new life or vision. Transformation means that what was before no longer exists. Sometimes it means death. So I look back at the past and even the recent past to think I’m content with who I am. In some cases I do miss what was and in others I do not. The pain and anger is gone and the sweet memories remain.
And is that not the lesson of Death in all its manifestations?
Posted in Death, Tarot and tagged Death card, friendship, Tarot