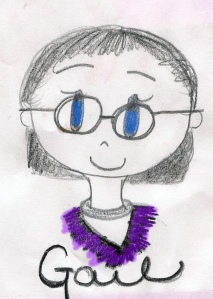 A drawing by my niece, Katie Reid, when she was about twelve.

Gail Wood has been a Witch and Wiccan priestess for more than twenty years, practicing a shamanic path celebrating the Dark Moon. She is clergy, teacher, ritual leader, tarot reader and Reiki Master.  She is the author of The Shamanic Witch.  Her other books, Rituals of the Dark Moon and The Wild God are out of print.

Gail discovered witchcraft and the Goddess in the mid-1980s after an intense period as a fundamental Christian. She has been a Witch and Wiccan priestess for more than 20 years; and is also a Reiki Master and an avid Tarot reader. She loves to teach. Her path emphasizes shamanic journeywork, the Dark Moon, and the ecstatic, compassionate discovery of magic. She has a strong solitary practice which is enhanced and augmented by group practice.

Gail started her writing career early when a story she wrote in the first grade was posted on the board by her teacher.  The story was about Jo-Jo the monkey.  Her mother saved that story for Gail!

Gail went to the University of Maryland.  Over the years, she earned a B.A. in library science education, a Master’s degree in library science (MLS) and a M.A. in English.  She has a 30+ year career as an academic librarian and college library director.
Her academic writing has appeared in The Journal of Academic Librarianship, The Pomegranate:  the International Journal of Pagan Studies, Library Journal, Feminist Collections and Choice.  She contributed three chapters on early American women writers to The Age of Milton:  An Encyclopedia of Major Seventeenth-Century British and American Writers edited by Alan Hagar.  Her contributions to this anthology were highlighted by a reviewer for The Times Literary Supplement by saying, “Gail Wood’s entries on pioneering Anglo-American women writers…are uniformly engaging, succinct, and stimulating.”  She prizes that analysis and hopes that her teaching and writing continues to reflect those qualities.