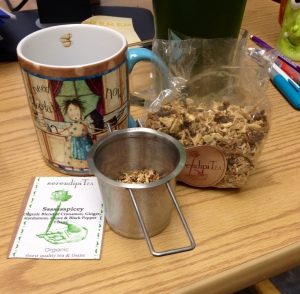 a nice hot cup of tea!

I’ve been away from blogging for a while.  My mother went into hospice last April and passed peacefully away surrounded by her family.  I needed a lot of time to grieve.  I’m still very sad and there’s still a lot of stuff to do, but I wanted to get back to some things I love to do. One of the things that remind me of my mother is tea.  She tried many kinds and always went back to Liptons.  She drank a lot of tea!  When I was a kid, she drank coffee with cream and sugar.  When she started teaching during my junior high school years, she switched to tea.  Story was, that the teachers she hung out with, charged 50 cents for a cup of coffee but tea was free.  Fifty cents was a lot of money for a cup of coffee, so she switched to tea.  And loved it.  She never went back to coffee.

I love a good cup of tea and I like variety.  I’m not a purist, I just like what I like.  To me it’s a mini-retreat in the midst of a busy day.  Tea is also a pick-me-up and an oasis.  I am trying to give up diet soda and now tea is my go-to drink.  Note:  I gave it up for several months but after several long car trips, diet soda was the easiest.  So I will be switching back to tea.

Tea often gives rise to reflections, divination and “deep thoughts.”  Sometimes, though, a cup of tea is just a cup of tea!  Whatever the moment, it is refreshing.

I read somewhere that starting with a spicy drink, such as pepper, cinnamon, or similar tea, can boost your metabolism and help you towards better fitness.  I have several and sometimes I think it works.  Today’s tea is from serendipiTea and is called Sssssspicey, and is an “organic Blend of Cinnamon, Ginger, Clove and Black Pepper.”  Technically, it’s a tisane since there is no tea in the blend.

It is wonderful and VERY spicy.  The blend gives you both a foretaste and a nice afternote.  The spices are very aromatic and just smelling it is an energizing experience.  It certainly is an invigorating tea for a Monday morning at work!  It is definitely effective.  I have gotten a lot done this morning.

As you can see, it’s a loose blend.  As I was sniffing it, I dropped the tea strainer into the brew and my cup was awash with the leaves and bits of herb.  I had to strain it again.  The tea did not guarantee grace or a spell against clumsiness!  Even after I finished the cup, the scent lingered on.

May your Monday be an energetic delight, and end by relaxing into sereniTEA!

One thought on “A Monday Morning TEAser!”